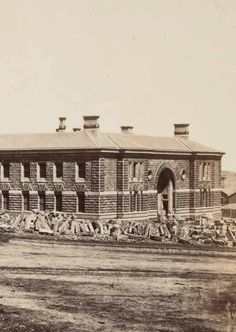 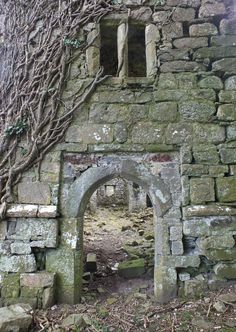 Bluestone activities for adults and older children - history and relaxation in Pembrokeshire, Wales

Bluestone, in Pembrokeshire, Wales, is a 5-star family resort set in Welsh countryside. Here are some Bluestone activities for adults and older children. 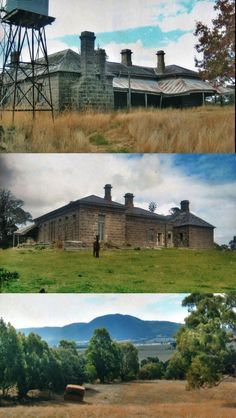 Eurambeen East Homestead, Beaufort, dates back to 1862, when brothers George and Francis Beggs settled in the area. They were Irish potato farmers, driven out of Ireland by the potato blight; they came to Australia and settled in the Western District as sheep farmers in 1850. Francis lived at neighbouring Eurambeen, while George and his wife, Charlotte, had the eleven-roomed bluestone house at Eurambeen East built using Oregon timber and stone that was quarried locally and hand chiselled by…

Kolor Homestead, Penshurst (279km W of Melbourne), sits beneath the twin volcanic cones of Mt Rouse and is one of the most picturesque homesteads in the Western District. A large bluestone villa with bluestone outbuildings, it is set in a well-established garden with extended parkland. In 1838, John Cox took up the Mount Rouse run which was to become Kolor. The government soon evicted him to set up the Mount Rouse Aboriginal Protectorate comprising 100 sq miles centred on the mountain. But… 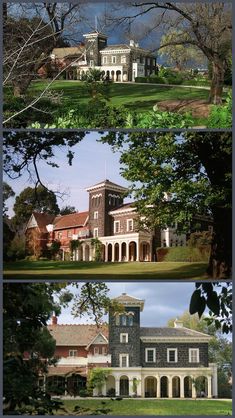 Bishopscourt, East Melbourne, is a large bluestone mansion designed by Newson & Blackburn. Its construction was delayed by the onset of the Goldrush as the labourers all left for the goldfields, but it was finally completed in 1853, with the red brick Queen Anne style wing added in 1903. It has been used as the residence for all of Melbourne's Anglican bishops and archbishops since its completion. Between 1874 and 1876, it served as Victoria's Government House.

Monivae Homestead, Hamilton Sth (310 km SW of Melbourne). The land was taken up by Acheson ffrench in c1839. He built a large homestead, but following his death in 1870 it was bought by James Thomson, a Scot, who built (on a different site) the present bluestone Italianate mansion, designed by English-born William Smith. Thomson lived there with his family of 11 children until his death in 1946, after which it was briefly a boarding school. There are plans to restore it as a tourist… 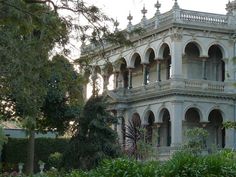 Ravenswood Mansion- Victoria Australia. 'Ravenswood', at 40 Beauview Parade in the suburb of Ivanhoe, Melbourne, Victoria Australia is a grand two-storey Italianate Renaissance-style mansion which was built in 1890-91. It features a two-storey colonnade of Corinthian columns, Tuscan pilasters, a single-storey pedimented porch, balustrades, parapets, cornices and festoons. 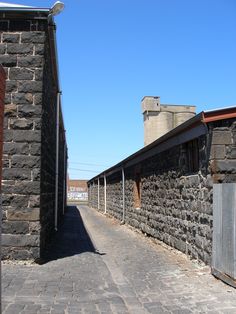 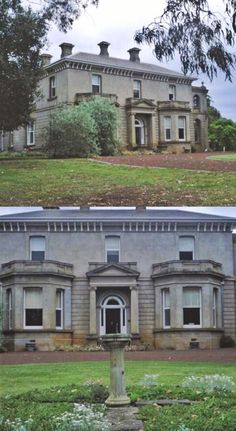 Minjah, Woolsthorpe (263kms W of Melbourne), was established by brothers Jeremiah George and Joseph Ware in 1845; it is one of a number of leading pastoral properties developed by the brothers in the Western District in the mid 1800s. The rendered-bluestone 30-room homestead was built in 1870 for Joseph Ware, to a design by Melbourne architects Smith and Johnson. Ware also commissioned a fine garden; many of the original trees survive.

Lauderdale Homestead, Alfredton (Ballarat), was built for John 'Jock' Winter in 1863 to the design of J.A. Doane. Winter arrived with his family from Scotland in 1841; he and his sons became extraordinarily successful pastoralists. 'Jock' became Ballarat's first millionaire after gold was found on one of his properties. He retired to Lauderdale, dying there in 1875. His slate-roofed, bluestone homestead with its distinctive columns and unusual bracketed eaves, is now surrounded by suburbia.

Mooleric Homestead, Birregurra (134km SW of Melbourne), built in 1871, was designed by architects Davidson & Henderson for the pioneering merchant and politician, James Ford Strachan. In 1923 a bluestone double-storey wing was added, with a corner bay window placed to command a view of the garden and distant Otway Ranges. Botanist William Guilfoyle designed the garden in 1903 for the then owner, Mrs Isabella Ramsay. The Ramsay family have owned the property since 1899.

Would You Live in a Church?

Just outside of Adelaide, Australia, there's a pedestrian-looking, bluestone church deserving of a second glance. Inside, the 1877 house of worship has been completely renovated and transformed into a thoroughly modern dwelling. It's such a unique residence that it's no surprise that it was snapped up almost immediately after it went on the market.

Mamre Homestead, Nalangil (167kms SW of Melbourne). The property was purchased in 1863 by local pioneer and passionate racehorse owner, Captain John Haimes; he built the bluestone homestead and stables in the 1870s. A lifelong bachelor and a very wealthy man, he had a seat in the Colac Shire Council, was a committee member for the local hospital and a J.P. The property is presently for sale after a 100 year ownership by the Roache family.

Gowrie, Glenroy, was built on land acquired in 1848 by Scottish immigrant pastoralists and cousins, James Robertson and Alexander Gibb. Robertson, Gibb and their wives arrived in 1841 after a traumatic voyage. Their ship, the India, had caught fire near Rio De Janiero and they had to complete the voyage aboard the Grindley. Gibb and Robertson selected 640 acres at Campbellfield and set up business as coachbuilders and blacksmiths, living in a tent. In c1850 they divided the land into two…