When Hunter S. Thompson Ran for Sheriff of Aspen

Thompson's plan was to run Edwards as a candidate for mayor, but as the campaign progressed and it started to look like Edwards might actually win, it occurred to him that he himself could run for sheriff and do his own part toward reforming local politics. 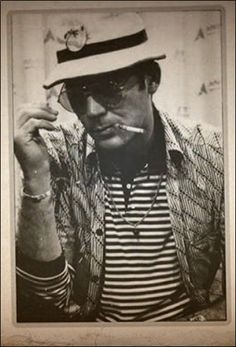 Despite publishing a novel and numerous newspaper and magazine articles, the majority of Thompson's literary output after the late 1970s took the form of a 4-volume series of books called The Gonzo Papers. Beginning with The Great Shark Hunt in 1979 and ending with Better Than Sex in 1994, the series is largely a collection of rare newspaper and magazine pieces from the pre-gonzo period, along with almost all of his Rolling Stone short pieces.

Hell's Angels: The Strange and Terrible Saga of the Outlaw Motorcycle Gangs - Wikipedia

Thompson spent the next year preparing for the new book in close quarters with the Hells Angels, in particular the San Francisco and Oakland chapters of the club and their president Ralph "Sonny" Barger. Thompson was upfront with the Angels about his role as a journalist, a dangerous move given their marked distrust of reporters from what the club considered to be bad press.

The hard core, the outlaw elite, were the Hell's Angels... wearing the winged death's-head on the back of their sleeveless jackets and packing their "mamas" behind them on big "chopped hogs." They rode with a fine unwashed arrogance, secure in their reputation as the rottenest motorcycle gang in the whole history of Christendom. 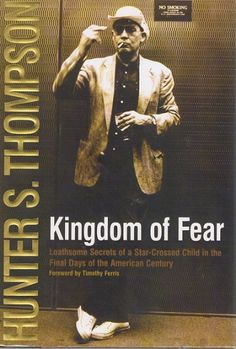 Kingdom of Fear: Loathsome Secrets of a Star-Crossed Child In the Final Days of the American Century is a book by Hunter S. Thompson, published in 2003. The book is a collection of writings about Thompson's past that focuses on the theme of rebellion against authority. Many of the stories are placed in the context of the aftermath of the September 11th, 2001 terrorist attacks and its emphasis on heightened police and military operations.

In 1971, American journalist Hunter S. Thompson went on his own journey to discover the American Dream. In his book Fear and Loathing in Las Vegas he uses Gonzo journalism to document and share his drug-induced experience traveling through 1970’s Las Vegas. Throughout the book, he frequently references and mocks the traditional ideals of Horatio Alger and takes stab at American consumerism and our cultural, overwhelming need to indulge. 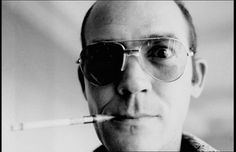 According to Jann Wenner, co-founder and publisher of Rolling Stone, Thompson's journalistic work began to seriously suffer after his trip to Africa to cover "The Rumble in the Jungle" in 1974. He missed the boxing match while intoxicated at his hotel, and did not submit a story to the magazine. Wenner is quoted as saying in the 2008 documentary of Thompson's life, Gonzo: The Life and Work of Dr. Hunter S. Thompson, "After Africa he just couldn't write. He couldn't piece it together". 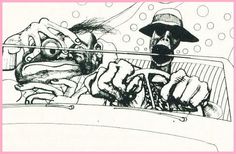 Fear and Loathing in Las Vegas

The sporting editors had also given me $300 in cash, most of which was already spent on extremely dangerous drugs. The trunk of the car looked like a mobile police narcotics lab. We had two bags of grass, 75 pellets of mescaline, five sheets of high-powered blotter acid, a salt shaker half full of cocaine, and a whole galaxy of multi-colored uppers, downers, screamers, laughers ... and also a quart of tequila, a quart of rum, a case of Budweiser, a pint of raw ether and two dozen amyls.

“A cap of good acid costs about $5. For this you get to hear the Universal Symphony, with the Holy Ghost on drums, and God singing solo.” 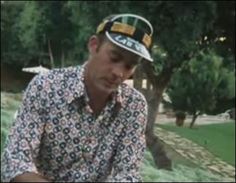 “Fiction is based on reality unless you’re a fairy-tale artist, you have to get your knowledge of life from somewhere. You have to know the material you’re writing about before you alter it.” 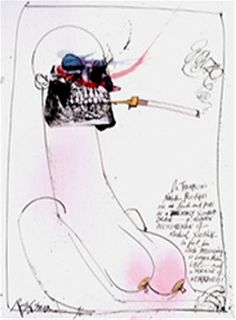 ‘Fear and Loathing in Las Vegas will have to be chalked off as a frenzied experiment, a fine idea that went crazy about halfway through… a victim of its own conceptual schizophrenia, caught & finally crippled in that vain, academic limbo between ‘journalism’ & ‘fiction’. And then hoist on its own petard of multiple felonies and enough flat-out crime to put anybody who’d admit to this kind of stinking behavior in the Nevada State Prison until 1984.’

“It is all well and good for children and acid freaks to still believe in Santa Claus — but it is still a profoundly morbid day for us working professionals. It is unsettling to know that one out of every twenty people you meet on Xmas will be dead this time next year… Some people can accept this, and some can’t. That is why God made whiskey, and also why Wild Turkey comes in $300 shaped canisters during most of the Christmas season.”

“In a nation run by swine, all pigs are upward-mobile and the rest of us are fucked until we can put our acts together: Not necessarily to Win, but mainly to keep from Losing Completely.”

Tiny hurts people. When he loses his temper he goes completely out of control and his huge body becomes a lethal weapon. It is difficult to see what role he might play in the Great Society.

“At the top of the mountain, we are all snow leopards.”