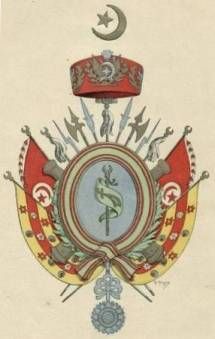 The Ḥusaynid dynasty was a ruling dynasty of the Beylik of Tunis, which was of Cretan Turkish origin. They ruled Tunisia from 1705 until 1957, first under Ottoman sovereignty, then as a protectorate of France. Their shield featured a scimitar of the nimcha type. The image is the frontispiece of H. Hugon's book on the Tunisian Regency (1913). 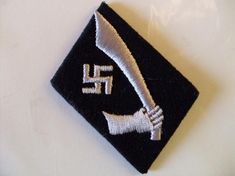 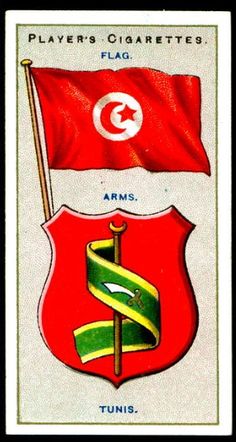 The Ḥusaynid dynasty was a ruling dynasty of the Beylik of Tunis, which was of Cretan Turkish origin. They ruled Tunisia from 1705 until 1957, first under Ottoman sovereignty, then as a protectorate of France. Their shield featured a scimitar of the nimcha type. The image is from Player's Cigarettes' series "Countries Arms & Flags", which was a series of 50 cards issued in 1912 for collection. 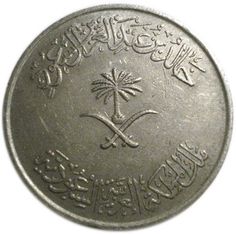 Together with a palm tree, two crossed Bedouin swords form the coat of arms of Saudi Arabia, as seen on this 1 Riyal coin of 1976. The two swords represent the Kingdom of Hijaz and the Kingdom of Najd, united in 1928 by Ibn Saud. 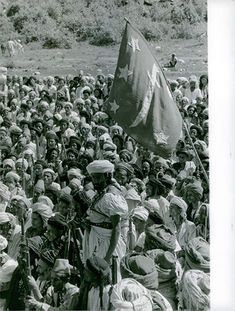 The curved sword appears on the national royal flag of the Mutawakkilite Kingdom of Yemen (1918-1970), accompanied by five stars. This flag was adopted in 1927, and lasted until 1970. The scimitar represented the armed forces and military struggle, while the 5 stars stood for the 5 pillars of Islam and the 5 prayers.

A banner captured by the Dutch colonial army on the Indonesian island of Sumatra in 1840 during a skirmish with Acehnese troops. The Dutch had occupied the town of Barus in 1939, an act ill-received by the Aceh Sultanate. The flag is painted on wool and cotton and features bullet holes and bloodstains. The Arabic texts on the banner are prayers cursing the Dutch and encouraging the Acehnese. [Rijksmuseum Amsterdam] 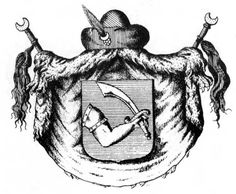 The weapon of Algeria featured an arm holding a broad curved sword, inspired by the North African nimcha. The weapon of Algeria was drawn by Von Hefner in his "Die Wappen der ausserdeutschen Souveraine und Staaten" (1857). This was probably used by the Regent of Algiers, a vassal state of the Ottoman Empire. 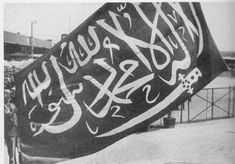 Prior to 1973, the sword on the national flag of Saudi Arabia was slightly more curved than the currently used stylized straight sabre. It's reminiscent of the curved Arab Bedouin sword (left), a local variant of the Persian shamshir (traditional Arab swords were straight). 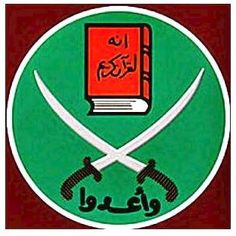 The logo of the Muslim Brotherhood. The Arabic word "prepare" is a reference to the Quranic verse: "And prepare against them all you can of power and steeds of war". Above the crossed swords is a red-colored Qur'an, representing the group's Islamic character and ideological guidance. 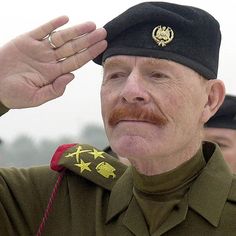 Starting from the rank of major general and its equivalents in both the navy and the air force, Iraqi military insignia feature two crossed scimitars. In the below picture, an example can be seen of a colonel general patch worn by ‘Izzat Ibrāhīm ad-Dūrī. 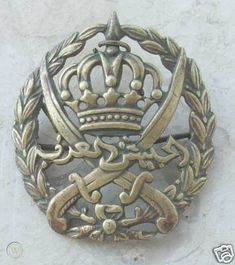 Badge of the Arab Legion (al-Jaysh al-ʿArabī lit. the Arab Army), the regular army of Transjordan formed in 1920 by British captain Peake. During World War II WWII, the Arab Legion took part in the British war effort against pro-Axis forces. 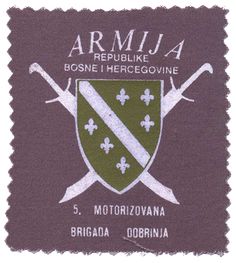 The 5th Motorized Brigade of the Bosnian Army was formed in 1992 during the Bosnian Civil War (1992-1995) and became well-known for their defense of the cut-off city of Dobrinja for about 72 days. Their patch features two crossed scimitars behind the Bosnian Coat of Arms. 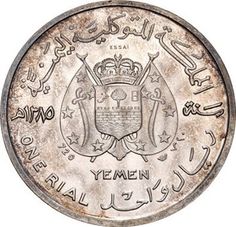 The coat of arms of the Mutawakkilite Kingdom of Yemen (1918-1970) features two scimitars of the shamshir type, as illustrated on this commemorative coin issued in 1965 after the death of Winston Churchill. This coat of arms was adopted in 1956 under king Aḥmed bin Yaḥyā. 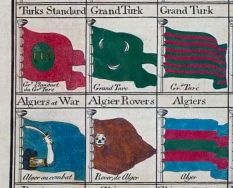 The weapon of Algeria featured an arm holding a broad curved sword, inspired by the North African nimcha. This was probably used by the Regent of Algiers, a vassal state of the Ottoman Empire. This is further confirmed by the Bowles's Universal Display of the Naval Flags of all Nations chart of 1783, describing it as the Algerian war flag, next to the Barbary corsairs' flag. 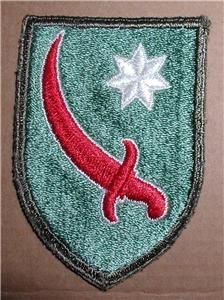 A WWII US Army Persian Gulf service command shoulder sleeve insignia patch. The Persian Gulf command was a US service command established in December 1943 in Persia to assure the supply of US lend-lease war material to the USSR. Patch in Pahlavi colors green, white & red. 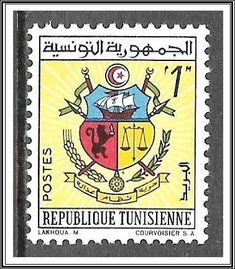 After the disposition of the Beylik in 1957, the nimcha scimitar was kept as part of the modern republic's coat of arms, now brandished by a so-called heraldic lion salient. This is a 1962 stamp.